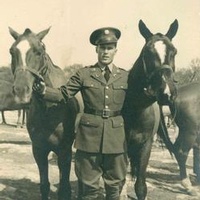 Wurlington Walter â€œW.W.â€ Hughes was born October 7, 1918 in Grand Prairie to Walter and Dolly Hughes. W.W. served his country proudly in the United States Army during World War II. He moved to Quitman from Mesquite in 2000 and was a member of Myrtle Springs Baptist Church. He was a service station owner/manager for many years. He was also a member of the Flora Masonic Lodge in Quitman, former member of Kiwanis Club of Pleasant Grove, and was a founder and served on the board of directors at Hidden Acres Retreat Center in Ola, TX.

He is preceded in death by his parents; first wife, Lillian Hughes in 2007; and second wife, Lorraine Stephens Hughes.

To order memorial trees or send flowers to the family in memory of Wurlington Walter Hughes, please visit our flower store.