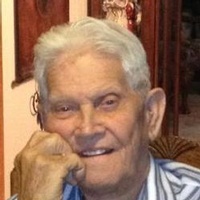 Funeral service for Witt Wayne Watson, 94, of Quitman, is scheduled for 4:00 PM Sunday, July 16, 2017 at Lowe Funeral Home with Brother Fred Morrow officiating. Committal will follow at Mt. Pisgah Cemetery. The family will receive friends for one hour prior to the service.

Witt Wayne Watson was born October 17, 1922 in Nome, Texas to Purley Witt and Ruth (Jones) Watson. He served his country proudly in the United States Air Force Ground Crew from 1941-1943, and in 1957 he moved to East Texas. On April 11, 1969 in Quitman, he married the love of his life, Martha Francis Watson. Wayne was employed as a mechanic for Shell Oil Company, retiring after 33 Â½ years. He was also the co-owner of Drapes by Francis.

Wayne attended Hainesville Baptist Church and was a very Godly man. He read his Bible daily and never had a meal without praying beforehand. When he wasnâ€™t reading his Bible or watching Joel Osteen, he could be found bird or squirrel watching. He also had a love for western shows and Wheel of Fortune.

He is preceded in death by his mother and father; one sister; and his wife, Francis Watson in April 2011.

To order memorial trees or send flowers to the family in memory of Witt Wayne Watson, please visit our flower store.