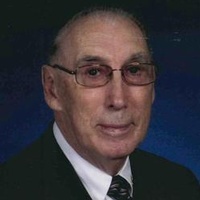 Funeral services for Mr. William Ernest "Bill" James, 86, of Hainesville are scheduled for 10:30 AM Friday , February 19, 2016 at Lowe Funeral Home Chapel in Quitman with Brother Fred Morrow officiating. Burial with follow at Concord Cemetery in Wood County near Hainesville. The family will receive friends from 6 to 8 PM Thursday evening at the funeral home.

Bill was born October 29, 1929 to Willie Stafford James and Ruth Estelle Stagner James in the Hainesville community in Wood County, TX. He attended school in Hainesville until 9th grade then Mineola schools 10th and 11th and graduated from Forest Ave. High School, Dallas in 1946. He then served in the U.S. Army in 1952 & 1953 and worked for Sears 42 years as a buyer.

Bill was very involved in his community and church. He served as a Deacon at the Faith Baptist Church in Quitman as well as serving on the Wood County Hospital Board for 20 years, served on the Sheriff's Posse in Wood County and a 60 year member of Flora Masonic Lodge. On July 23, 1955 he married the love of his life Barbara Penix James.

If desired, memorials may be made to Faith Baptist Church in Quitman or Gideons International.

To order memorial trees or send flowers to the family in memory of William Ernest "Bill" James, please visit our flower store.