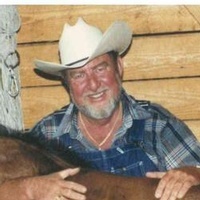 William V. Collier, 86, known to friends as "Wild Bill" and to his wife a "Rancher Bill", passed away on October 13, 2015 in Quitman, Texas. He is survived by his wife, Jan Collier, brother Michael Collier, niece Lynn Garrison and nephew Jason Collier of Acworth, Georgia.
Bill was born in Acworth, Ga. to Lillian and Wallace Collier. He attended Georgia Military College and was in the US Army as a Sergeant during the Korean conflict. He was in the very first unit that was to be known later as the "Special Forces or Green Beret". Bill was very proud of the military service and loved his country very much. After working for Mead Packaging as plant superintendent in Atlanta Ga. he worked for Atlantic Envelope as one of their top salespersons. Before moving to Florida in 1987 he was in business with Data Media in Roswell, Ga. In Santa Rosa Beach, Fl. he held a Capitan's License and ran two charter fishing boats out of his home on Mack Bayou.

In 1991 he moved to De Funiak Springs, Fl. and started a ranch known as the "JBC" and raised, bred and showed quarter horses in Fl., Ga., Al. and in Tulsa, Oklahoma at the Palomino World Show. In 1994, 1995 and 1996 he was proud to have had 3 horses in the top 6 at the World Show in Tulsa. His stallion, IMA Dandy Bar Dude" was the sire and grandsire of world champions.

In 2001 he moved back to Georgia and lived in Blue Ridge Ga. until 2006 when he moved to Quitman Texas on a small horse ranch. Bill loved animals, antique guns, fishing and the west. He was an accomplished musician, playing harmonica, keyboard, violin and piano. He was a Baptist by faith and Irish by nature. When as a young man, he raced go carts he acquired the nickname "Wild Bill".

Bill will be missed by his friends and family but will always be loved and missed most by his wife, Jan, of almost 23 years. They were always together. He was truly a caring and wonderful man. He was known for his wit and his ability to make people laugh with some of his stories of his life.

Bill will be cremated and a memorial service will be held for family and special friends on October 28, 2015 at 2 PM in the chapel at Lowe Funeral Home in Quitman. In lieu of flowers please donate in his name to a local ASPCA or Humane Society.

To order memorial trees or send flowers to the family in memory of William V. Collier, please visit our flower store.