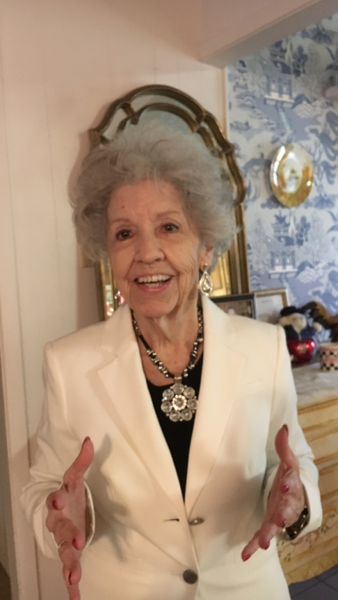 Virginia J. (Ginger) Embrey was born April 12, 1936 in Avery, Texas. She died Dec. 2, 2020 in Longview, Texas.  She had a long journey here on earth, but it was one of the best. She was the daughter of Antone and Estelle Jones and is predeceased by them and her two brothers, Jeral Thomas Jones and Adam Ray Jones. She is survived by her husband Gaylon Embrey of Quitman, Texas, son Donald Richard (Ric) Justiss, Jr. and wife Michelle of Mesquite, Texas, daughter Gina Gay Fikes and husband Perry of Helotes, Texas, and son Andy Joe Embrey and wife Sharon of Lawson, Missouri, and a good congregation of grandchildren and great grandchildren. These were her family, who more and more as years went by became the love and joy of her life.

Ginger married Richard Justiss shortly after graduating from high school in 1953. Sadly and unexpectedly she became a widow inside of one year. Four months later she was blessed by the birth of her son Ric. When Ric was two she married Gaylon Embrey, a first cousin to Richard. She and Gaylon were married for 64 years. Gaylon says he didn’t know at the time she proposed to him that he was about to win the lottery, but he quickly learned that he did.

Ginger worked hard all her life, starting with working in the field as a little girl, lugging tomato crates around that were heavier than she was. As a young wife and mother, she was forever busy at home, making things look good with whatever was available to her. She was gifted at that. She never learned to do “nothing” well. She was always too busy doing something. Not long after moving to Quitman in 1967, she went to work for Herman Puckett, Jr in the building business, as his secretary and right hand man for 19 years. When he retired she went to work at the Wood County National Bank at the time it opened. Following this she worked several years for Jan and Jay Gormon at the Tea Room, then years later got in the antique business, then dabbled in selling gold jewelry. The last public work she did was with Royal Valley Funeral Home. She said she enjoyed this more than any work she ever did, because she felt like she was a help to people who were grieving for their lost loved ones. Her family wishes she was around to help them now. She was beautiful, always wearing her trinkets and her well known Ginger smile. She was fun loving, industrious, dependable, and faithful in every way she knew how, as an employee, a friend, a wife, a mother, and as a Christian. In the end she was the loving matriarch of the family. When she died we, her family, now know that we have one less person in this world who truly loves us. We will not forget her, ever. We will always remember her with kindness, as we know God will.

To order memorial trees or send flowers to the family in memory of Virginia (Ginger) Embrey, please visit our flower store.