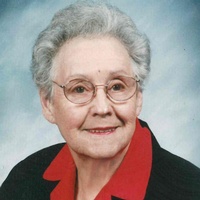 Funeral service for Sheila May Williams, 89, of Hainesville, is scheduled for 2 PM Thursday, December 6, 2018 at St. Dunstanâ€™s Episcopal Church in Mineola with Thomas Pantel officiating. Burial will follow at Concord Cemetery. The family will receive friends one hour prior to service.

Sheila was born May 16, 1929 in Gateshead, England. She passed away on December 3, 2018. Sheila came to Texas in 1947 and married Thurman Williams whom she had met in England when he served in the U.S. Army Air Force during WW II.

Sheila joined St. Dunstanâ€™s Episcopal Church shortly after moving to Hainesville. Through the years she was a Sunday School teacher, active in ECU and altar guild.

Membership in The Tyler British Club gave her a chance to have tea and a chat with other British women in the area.

Sheila worked for Mineola ISD for 23 years in the cafeteria and as Director of Food Services. She enjoyed sewing, cooking, and crafts and was a long-time member of the Wood County Texas Extension Education Association. Sheila worked with youth in the Boy Scouts and Girl Scouts.

She is preceded in death by her parents, Joseph and Eva Neilson; her husband, Thurman Williams; an infant son; and grandson, Jason Stanley.

St. Dunstan's Episcopal Church
To order memorial trees or send flowers to the family in memory of Sheila May Williams, please visit our flower store.
Send a Sympathy Card
Send a Sympathy Gift