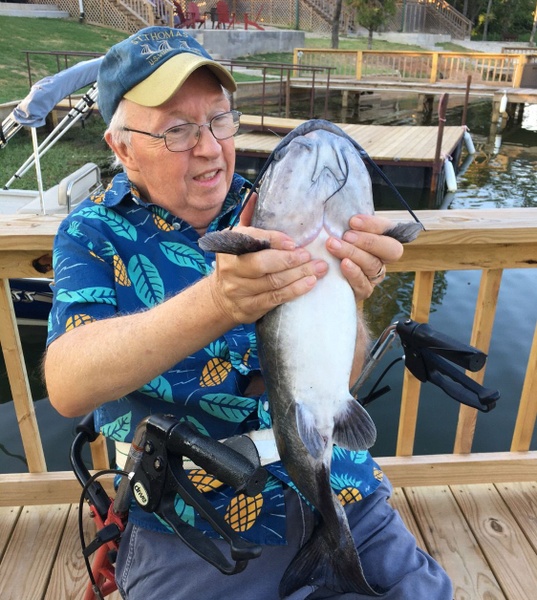 Sammy Russell Smith, 73, of Alba, Texas passed away on April 25, 2022. A devoted husband, father, grandfather, brother, and friend who will be dearly missed by those who loved him.

Sammy was born on August 31, 1948, in Dallas, Texas to the late Dorothy and Roy Smith. He married the love his life, Sarah Farmer, on July 3, 1969, in Dallas. They were married 52 wonderful years before his passing.

Together, they welcomed two children, Brian and Marsha. Sammy was a member of the Fellowship Church of Grapevine. Sammy lived on Lake Fork, and on mornings that he could, he loved to sit on his porch, have coffee, and look at the beautiful lake. He enjoyed going fishing and catching catfish and crappie. He also enjoyed spending time with his family and grandkids.

Sammy worked for over 30 years in the finance/accounting department for the cheerleading industry. Beginning his career in the cheerleading business, he was a master at collecting past due accounts.  As with Sam, he still kept in touch with many of the past employees/friends from each of the different cheerleading companies that he worked for.  Even after he retired, he looked forward to having the “group lunches”.  He also worked part time from his home at the lake for the Cheerleading Company in Dallas.

Sammy is welcomed into Heaven by his parents, Dorothy and Roy Smith; and nephew, Scotty Smith.

He is survived by his loving wife of 52 years, Sarah Farmer Smith of Alba; his two children, Brian Smith and wife Jill of McKinney, Texas, and Marsha Hale and husband Jeff of Dallas, Texas, and Johnny Burkett of Garland who was like a son to him; brothers, Marty Smith of Lake Tawakoni, and Ross Smith and wife Karen of Heath, Texas; his nephews, Michael Smith and wife Emma, Chad Smith and wife Melanie, and Corey Smith and wife Destiny; his five grandchildren, Garrett, Hailey, Casey, Kathryn, and Cody Jack; and several extended family.

If you knew Sam, you were friends for life.  He always looked forward to the South Oak Cliff, Class of 1966 mini reunions to visit with his friends from school.

When he first married Sarah, they decided it was important to start a marriage by going to church.  His parents told him about a church in Pleasant Grove that would drive a bus to south Oak Cliff and pick up a little widow lady that wanted to attend.  They became very involved with the Beacon Hill Baptist Church and Sam soon became a deacon of the church.  He enjoyed working with the bus ministry.

After moving to Coppell, TX, they joined the First Baptist Church of Coppell.  He was honored to be included in a wonderful Sunday School class that stayed close to each other even to this day.

In his retirement, his goal was to go fishing at the lake.  Finally locating the perfect neighborhood on Lake Fork, he could easily walk down the ramp to the sidewalk that led to his dock.  God blessed him with wonderful neighbors at the lake.

Sam will be missed terribly by his loved ones and friends but left each with lots of fun and happy memories to keep in their hearts until they see him again.

2 Corinthians 5:1 (KJV) – “For we know that if the earthly house of this tabernacle were dissolved, we have a building of God, an house not made with hands, eternal in the heavens.”