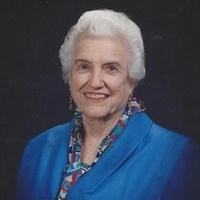 She was the former president of the PTA at Grand Prairie ISD and was a member of Liberty United Methodist Church in Quitman.

She is preceded in death by her parents and husbands. Rubye also had five siblings, all of whom are deceased; Reginald Brown, Ruth Townend, Hank Brown, Sam Brown and Elizabeth Meroney.

She is survived by her son and daughter-in-law, Stan and Carol Perry of Colleyville, TX; , her grandsons, Chad Perry of Austin and Jared Mathews and wife Katherine of Port Aransas; and her great grandson Hendrix Mathews.

Rubye enjoyed almost every day of her 101 years on earth, and she used many of them helping those around her to be better people and enjoy their lives as well. She loved life and people and was the most positive person her family and friends have ever met. Many people have called to tell them how much she meant to them. Her now-retired, wound-care specialist said she could count on two hands the number of patients she had befriended long-term in her 40 years career and said Rubye was her, â€œNumber Oneâ€. One of the administrators at the nursing home say she had â€œchanged her lifeâ€ during just a brief encounter. She said she had been harboring something for a long time, and Rubye gave her a different way of looking at it and that had made her a much happier person. When asked if she remembered what she said, Rubye said she didnâ€™t. Not unusual for her to offer sage advice, and she did it without pretense. It just came naturally to her. A lady who had bought a vacation house next to Rubyeâ€™s home on Lake Lydia said when they met she told Rubye she had a lot of grandkids and she hoped they wouldnâ€™t disturb her. Rubye said, â€œThe more noise you make over there the happier I will beâ€. She loved the sound of children playing, especially when they were playing with their grandchildren, and she loved being called Granny. Stanâ€™s best friend since the second grade, whose life she changed in a profound way, always said he thought she was an angel on earth. Well she is an angel in heaven now, and heaven is definitely a better place for having her there. Hopefully there are some thrift stores she can frequent. Her family will celebrate her life every Christmas season from now on as long as there are those of here who remember her and how wonderful she was. For those who never had a chance to meet her, really missed a lot.

For those who wish to do something to remember her, instead of flowers, Rubye would love for Scottish Rite Hospital in Dallas or Liberty Methodist Church in Quitman be the recipients.

To order memorial trees or send flowers to the family in memory of Rubye Claryce Kindsvater, please visit our flower store.