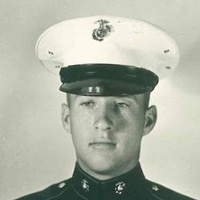 Buddy is survived by his sisters, Shirley Dodd Williams of Tyler and Sue Dodd Zook of Navasota; and nieces and nephews, Susan Waller Burnett, Stuart and Brian Waller, and Donna Dodd, who all considered him to be a special uncle.

Buddy was born March 18, 1933 in Troup, TX to George Prentiss and Ruby Ellen Dodd. He was a 1951 graduate of Quitman High School where he played basketball including the championship teams of 1950 and 1951. Buddy served in the US Marines on the USS St. Paul during the Korean conflict. Upon returning to Quitman, Buddy attended East Texas State College and later worked for Caska Corp. as an office manager for several years.

Funeral service for Mr. Dodd will be held on Saturday, January 27, 2018, at 2:00 PM at Lowe Funeral Home with Brother Gabe Martin officiating. Burial will follow at Roselawn Memorial Gardens in Mineola.