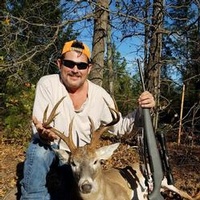 Robert Clifton Wattis, 52, of Winnsboro, Texas, passed away December 13, 2017 as a result of an automobile accident near Quitman, Texas. Robert was born August 10, 1965 to Bette Kay and Edmund Orsen (E.O.) Wattis in Austin, Texas.

Robert was an avid hunter and spent as much time outdoors as possible. He was a master carpenter and worked in the construction field most of his adult life. Robert loved to travel when he had the opportunity. Some of his happiest times were riding four wheelers with friends, salmon fishing in Alaska and snorkeling in Cozumel. He also loved watching movies and making his delicious homemade pizza.

Robert is preceded in death by his father Edmund (E.O.) Wattis. He leaves behind many loved ones including his daughter Erica Bednarz and son-in-law Colton Bednarz of Bullard. His granddaughter Emma Grace Reel of Bullard, close friend and former son-in-law Randolph Reel of Ore City, former wife and lifelong friend Melissa Williams of Bullard and fiance Terri Strickland and her son Landon of Quitman.

A memorial service will be held at Lowe Funeral Home in Quitman on January 6th at 1p.m. In lieu of flowers the family requests donations be made to SPCA of Texas or the charity of your choice.

To order memorial trees or send flowers to the family in memory of Robert Clifton Wattis, please visit our flower store.