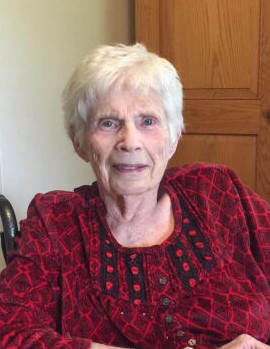 Reba Francis (Hallum) Jeffries was born in Maud, Oklahoma on July 6, 1925 to the late W. D. and Etoile (Daughety) Hallum. She married Olen C. Jeffries and to this marriage, two children were born. She and Olen were married over 55 years before he passed away in 2009. Reba worked as a 1st and 2nd grade school teacher and retired in 1985 after almost 40 years of teaching. She taught in Artesia, Roswell, and Farmington, New Mexico.
In 2009 she moved to Lake Lydia. She loved to sew and quilt, and made beautiful embroidered blocked quilts for her grandchildren. Every Sunday she looked forward to her weekly drive around Wood County to get ice cream or shakes with her daughter.
Reba was a wonderful mother, grandmother, and great grandmother and will be deeply missed by her family.
She is preceded in death by her parents, W.D. and Etoile Hallum; husband, Olen C. Jeffries; son, William Jeffries; and four siblings, Cecil, Virgil, Alice, and Bernice.
Left to cherish her memory is her daughter, Susan Dodge and husband Michael of Quitman; two siblings, Glen Hallum of Oklahoma and Estelle Watters of Massachusetts; two grandchildren, Amy Franks and husband Steven, and Chris Shiring and wife Amanda; five great grandchildren, Fina, Lulu, and Wilson Herringa, and Janie and Freddie Kindlmann; her loving caregiver, Sharon Allen; dear friend who was more like a daughter, Barbara Pettigrew; and several nieces, nephews, and extended family.