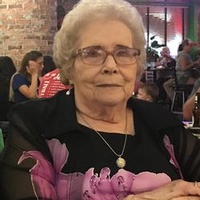 Peggy Yalch Long was born July 17, 1937 in Dallas to the late Michael Jack and Mattie Lou Yalch. Peggy moved to Quitman in 1999 from Houston and was a member of First Baptist Church of Quitman. She enjoyed playing dominos and 42 several times a week with her friends, doing genealogy research, and participating in events at Forever Young Activity Center.