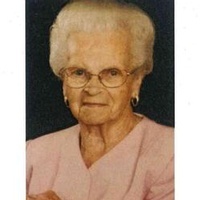 Services for Nona Mae Swisher McNown, 92, will be 3 p.m. April 6 at Faith Baptist Church, 405 Hart Street in Quitman with Brother Perry Crisp officiating. Viewing will be at 2 p.m. at Faith Baptist Church. Pallbearers will be Mike McNown, Todd Pecorino, Jerry Hudnall, Jerry Kroeker, Payton Turner, and Kenneth Williams. Nona died on April 2, 2015 at her home in Quitman. She was born on February 16, 1923 in Chautauqua County, Kansas to Goldie Coon Swisher and Albert Ray Swisher. She was one of six children. She was married to Raymond Wesley McNown in 1939, and later moved to Lake Charles, Louisiana, then later moved to Quitman in 1989. She was a member of the Faith Baptist Church in Quitman. During her life she was a school bus driver in Lake Charles, a hairdresser, a licensed pilot, and also worked in apple orchards. She was preceded in death by her parents; her brother Otis Swisher; her sister Ilene Day; her sister Myrtle Chapman; her husband Ray McNown; and her son Davy Dean McNown. She is survived by her son, Jesse McNown and wife Corky of Coke; son, Sherman McNown and wife Annie of Coke; daughter, Reta McNown of Quitman; six grandchildren; 18 great-grandchildren; 11 great-great-grandchildren; and numerous nieces and nephews. In lieu of flowers, please donate to Faith Baptist Church of Quitman or Gideons International, P.O. Box 813, Mineola, TX 75773

To order memorial trees or send flowers to the family in memory of Nona Mae McNown, please visit our flower store.