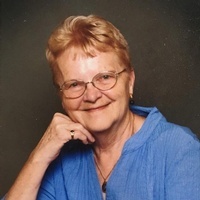 Myrna Shearer, 82, of Quitman, formerly of Richardson, passed away Sunday, March 31, 2019 in Quitman.

Myrna Loy Shearer was born in Belle Fourche, South Dakota on September 13, 1936. She was the daughter of the late Bernice (Childers) Jordan and wife to the late Harold Dean Shearer.

Myrna was a member of Southfork Cowboy Church in Murphy, Texas before moving to Quitman. In her younger years she was an active member of the Red Hat Society. Later in life she enjoyed playing bingo, crocheting, reading, enjoying time with her cat, Fluffers, and especially enjoyed attending church.

Her favorite thing to do was love on her grandchildren and great grandchildren. At the young age of 82 she could be found playing in the floor with her 18 month great grandchild or in a pillow fight with her 8 year old grandchild. She loved children and even ran a daycare out of her home, where she took care of 12 children. She had a lasting effect on all the children she cared for and touched many of their lives. She adored the children she babysat and treated them with both love and discipline as if they were her own grandkids.

Myrna is preceded in death by her mother, Bernice Jordan; brother, Terry Ripple; husband, Harold Dean Shearer in 2009; and her loving cat, Fluffers.

There will be a private ceremony held at a later date.

To order memorial trees or send flowers to the family in memory of Myrna Loy Shearer, please visit our flower store.