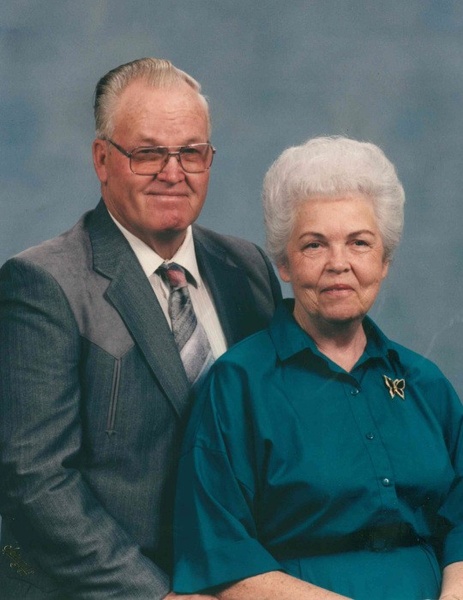 Funeral services for Mr. Clarence Junior Lee and Mrs. Alice Faye Lee will be held on Tuesday, May 11, 2021 at 11:00 AM in the Lowe-Gardner Chapel in Quitman, Texas with Brother Fred Morrow officiating. The couple will be laid to rest at Roselawn Memorial Gardens, Mineola, following the service.  A visitation will be held at Lowe-Gardner on Monday May 10 from 6 until 8 PM. Alice Faye and Clarence Lee, of Quitman, passed away on May 7, 2021. Clarence was born in Lovelady, Texas on March 7, 1931 to Allen Thomas and Ruby (Buchanon) Lee.  He worked for the Texas Highway Department until he retired.  Alice was born in Quitman, Texas on January 19, 1928 to James W. and Alta Elizabeth (Harris) Harbin.  She worked as a nurse’s aid at the Heritage Nursing Home.  Alice and Clarence were married on March 10, 1951 at Liberty United Methodist Church.  With many years of love and laughter, they added to their family a son, Larry; daughter in law, Sharon; and two grandsons, Douglas and Daniel Lee. The Lees were valued members of the Liberty United Methodist Church and their ever-abiding love never failed them. They are preceded in death by Clarence’s parents, Allen Thomas and Ruby Lee; Alice’s parents, James and Alta Harbin; Clarence’s brothers and sisters, Earnest, Margaret, Bertha Mae, James, and Vernon Wayne; and Alice’s siblings, James William Harbin, Alta Mae Harbin, and Mary Irene Halbert. Left to cherish their memories is their son, Larry Lee and wife Sharon; grandchildren, Douglas A. Lee and Daniel C. Lee and wife Chelsea; four great grandchildren, Hillary, Cainin, Kennedy, and Leighton; and a host of friends. Serving as pallbearers are John Noe Jr., Robert Woods, Tommy Bingham, Charles Harris, Douglas Lee, and Daniel Lee.
To order memorial trees or send flowers to the family in memory of Mr. Clarence Junior Lee and Mrs. Alice Faye Lee, please visit our flower store.