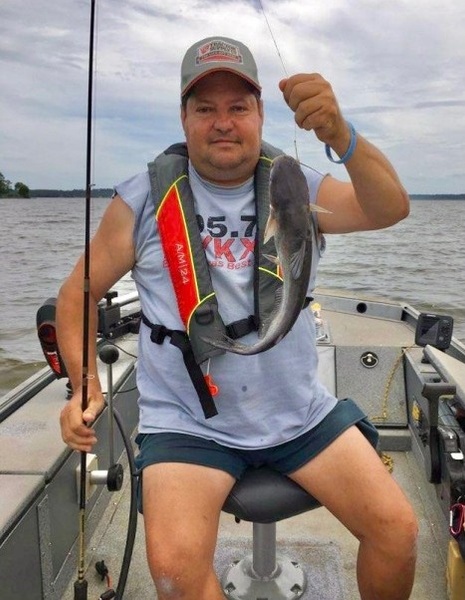 Larry Patrick, resident of Chandler, Texas, passed away unexpectedly on July 6, 2021, at the young age of 55, while doing what he greatly loved, fishing.  Larry Is survived by his mother, Anita Augustini; his daughters, Lauren Doan and Lacey Hollingsworth; sons-in-law, Matt Doan and Austin Hollingsworth; grand-daughters, Bella Maynard, Presley Maynard, Paisley Hollingsworth, and Rosalie Hollingsworth; sister-in-law, Celinda Patrick; niece, Alicia Stefka; nephews, Chris Patrick and Brian Stefka; great-nephew Colby Stefka; and great-nieces, Halle Stefka, Dakota Patrick, Kailey Patrick, Annaley Patrick, and Josie Patrick. Larry is preceded in death by his father, Prentiss Patrick, brother, Paul Patrick, sister, Cindy Patrick, maternal grandparents, Abe Hirson, and Jennie Bartrell, and paternal grandparents, John Patrick, and Flossie Patrick. Larry Patrick was born in Dallas, Texas, on January 1, 1966, to Anita Patrick and Prentiss Patrick. He grew up in Gilmer, Texas, where he graduated high school in 1984. Larry began his career as a butcher at the early the age of 13 and spent many years working as a meat department manager in Longview, Texas. He married Laura Jenkins on April 18, 1987 and welcomed his two beautiful daughters into the world in 1992 and 1996, whom he loved very much.  Larry was a devoted father, son, and loving friend to many. He was old fashioned and believed in working hard for what you get; success was not based on materialistic items, but your morals and character.  Larry was a proud Texan and loved collecting and shooting guns. He also enjoyed being outdoors and staying busy. Some of his favorite hobbies included: fishing with his buddies, deer hunting with his brother, cooking, reading, building things, and yard work. He adored his two cats who he constantly spoiled, Daisy Mae, and Squeaky. Larry always appreciated spending time with his family around a home cooked meal, usually followed by a competitive game of cards, or dominoes. He was a spiritual man, and Gideon. Larry led many to a personal relationship with Christ, through church and his warm fellowship. He will be remembered as having a big heart that never ran out of room for new friends and will be deeply missed by his family, friends, pets, and all that had the privilege of knowing him.  A celebration of life is scheduled for 4:00 p.m. on July 18, 2021,at the Sunrise Shores Property Owners Association: 4593 Sunrise Dr., Chandler, Texas, 75758. Flowers and condolences may be directed to 4593 Sunrise Dr., Chandler, Texas, 75758.    For those wishing to send flowers, please visit https://www.bellafloralquitman.com or call 903-497-2925.
To order memorial trees or send flowers to the family in memory of Larry Patrick, please visit our flower store.