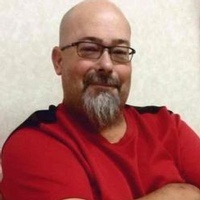 Memorial service for Kevin Nichelson, 52, of Quitman, is scheduled for 11:00 AM Saturday, January 28, 2017 at Faith Baptist Church with Brother Mike Midkiff officiating.

Kevin Arthur Nichelson was born July 21, 1964 in Cozad, Nebraska to Harley and Mary (McCarthy) Nichelson. Kevin and his family were Quitman residents for four years and attend Faith Baptist Church. He was a diesel mechanic for Caterpillar for over 15 years and loved his job. He loved working and tinkering with engines. Kevin had a heart of gold. He enjoyed helping people and was always willing to lend an extra hand. He also loved the outdoors, whether it be hunting, fishing, or camping, but he loved his two boys more than anything in the world. They were his number one priority. Kevin was a wonderful father, husband, and friend and will be greatly missed by many.

In lieu of flowers, the family asks that you make a donation in memory of Kevin to help with expenses.
Tammy Nichelson
P.O. Box 1511
Quitman, TX 75783

To order memorial trees or send flowers to the family in memory of Kevin Arthur Nichelson, please visit our flower store.