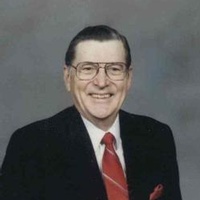 Services for Dr. John W. Scott of Mineola are scheduled for 2:00 PM Thursday May 26, 2016, at First United Methodist Church in Mineola with Reverend Bobbie Maltas officiating under the direction of Lowe Funeral Home, Quitman. Burial will be in Roselawn Cemetery in Mineola.

He served his country in World War II for three and a half years in the United States Air Force, European theatre.

He married Mary Katherine Smith in 1950, and the couple moved to Mineola in 1952. Dr. Scott was a member of the Mineola Independent School Board of Trustees from 1964-1976. He served as board secretary from 1966-1969, and board president from 1969-1976. He was a member of the First United Methodist Church in Mineola, serving as board chairman and lay leader for many years. Dr. Scott also taught Sunday school for a number of years and was choir director for ten years. He served as president of Gideons International Wood County Camp. He was a member of the Royal Hunting Club for many years.

He is preceded in death by his wife, Katherine Scott, in 2014.

Dr. Scott loved and served his Lord and Savior, Jesus Christ, his family, and his fellow man. To God be the glory!
To order memorial trees or send flowers to the family in memory of John William Scott, please visit our flower store.