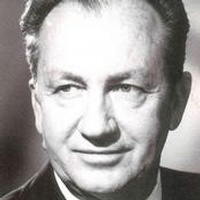 Funeral services for John Everett "Jake" Johnson are scheduled for 1:00 PM Tuesday, May 21, 2013 at Lowe Funeral Home Chapel of the Chimes, Quitman with Brothers Fred Morrow and Don Vaughn officiating. Burial will follow with a 4:00 PM graveside at Wolfe City, Tx. Family will receive friends from 6:00-8:00 PM
Monday evening May 20th at Lowe Funeral Home. Jake was born October 28, 1919 in Wolfe City to John Williams and Ada Belle Stanford Johnson. He was Vice President of Theatrical and stage employees (Film Industry) for 22 years and was a Baptist. He moved to Quitman in 1990 from Weatherford, Tx and was preceded in death by his wife Peggy Pruitt Johnson in April 2003.