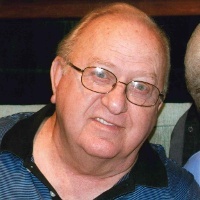 Memorial service for Mr. John Thomas Alafonso is scheduled for 11:00 AM Friday, July 5, 2019 at First Assembly of God with Brother Ken Otwell officiating.

Johnâ€™s early years were spent in Brooklyn, New York. Then the family moved to Galveston, Texas.

At the age of 17, John joined the Air Force. He finished basic training in San Antonio, Texas. He served two years in Tachikawa, Japan. He finished his time of service in El Paso, TX.

Most of Johnâ€™s adult life was spent in or near Aztec, NM. John held jobs for several oil companies, one of which was Thriftway, where he worked for and with, Lloyd and Cozene Newman. John was also a disc jockey for five years for KNMI, a Christian radio station in Farmington, NM.

John worked for San Juan County, NM, as a supervisor in the Community Resource Division, part of the Public Works Department. He directed the work of trustees (inmates) from the Countyâ€™s Detention Center.

After fifteen years, John retired and he and his wife moved to Quitman to be near family.

John attended First Assembly of God in Quitman. After he would say that he liked everyone he churched with. He especially enjoyed the fellowship at the Menâ€™s Breakfast.

John was preceded in death by his parents; his sister, Catherine; his brother, Paul; his son, Anthony; and his grandson, Charlie.

John is survived by his wife of 25 years, Lynette; three daughters, Carleen, Darlene, and Fatih; two sons, Roy and Darrell; two sisters, Mary and Geneva; his mother in law, Cozene; eight grandchildren, and many nieces and nephews.

First Assembly of God
To order memorial trees or send flowers to the family in memory of John Thomas Alafonso, please visit our flower store.