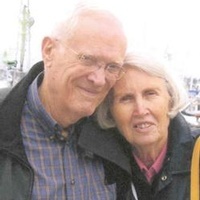 Joe Gregg Moseley Jr. was born to Joe Sr. and Irene in Dallas on November 23, 1929. He passed away on June 24, 2016 at the age of 86. He graduated from Woodrow Wilson High School and SMU, and served in the Naval ROTC. He married Diane Hayden in 1950 and they celebrated 65 years together in November. Joe was a renowned barbecue man in Dallas, operating several downtown locations and one behind Big Tex at the Texas State Fair for many years. He was a mason for over 50 years, member of the Flora Lodge and a Shriner.

After living in Dallas for many years, Joe and Diane moved to Quitman where they embraced a charity called Christmas Sharing, traveled often, and enjoyed their friends and family. Joe loved having coffee with the guys, telling stories, sharing jokes, and working on his computer.

There will be a celebration of life at First United Methodist Church in Quitman on Saturday, October 29, 2016 so family and friends across the states can gather together and share memories of Joe.

To order memorial trees or send flowers to the family in memory of Joe Gregg Moseley Jr., please visit our flower store.