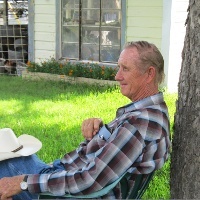 Jimmie Roy Dozier, beloved husband, father, grandfather, relative and friend, passed from this world into the presence of his Lord August 9th, 2019.

Funeral services will be held at 11:00 AM, on Tuesday, August 13, 2019, at the Faith Baptist Church in Quitman. Visitation will be from 6 until 8 PM on Monday, August 12 at the Lowe Funeral Home.

Jimmie Roy Dozier was born February 4th, 1941, the 1st of 3 children to Abner â€œCapâ€ Dozier and Elizabeth Hamilton Dozier on a cotton farm outside of Forney, Texas. He graduated from Forney High School in 1959 and enlisted in the Navy that summer. He served on the USS Sperry, a submarine tender. Jimmie separated from the service May 10th, 1963 with rank and grade of ET2 E-5.
Upon returning home to Forney, Jimmie enrolled at UT Arlington. There he met Faye Rhea Hollowell, and they became engaged in 1964 and married January 22nd, 1965. Jimmie graduated UTA in 1968 with a BSEE. He worked at E-systems Garland, and began work on a Masters in Electrical Engineering.
In 1971 Jimmie joined Wood County Electric Co-op and moved to Quitman. Jimmie and Faye's only child Douglas Roy Dozier was born November 12th, 1971.
In 1972, Jimmie purchased property and built a house for his small family. Exchanging a tie for bluejeans after work, he began developing a cattle farm that was home for the rest of his life. The family grew as Doug married and was blessed with a granddaughter, Hayley.
Jimmie retired from WCEC in 2003, as assistant co-op manager and head of Engineering Department after 31 active and productive years.
Jimmie also built an active Church life and served his community in many ways. Among other things, he was board member and board president for Quitman ISD. He served on Wood Co Farmers Coop's board and most recently was on the board for Texas Farm Bureau in Quitman.
Jimmie loved his Lord, his family, his community and his farm.
He enjoyed running, competing in 5 and 10K's, 2 marathons and a half-marathon. He loved travel with his family; enjoying many winter trips skiing while summer trips were often camping. He loved having family gatherings at the farm. He passed at home, on the farm he loved, peaceful in God's good grace.

Jimmie is survived by his wife of 54 years, Faye Rhea Hollowell Dozier, son Douglas Roy Dozier and his wife Jenelle Vidaurri Dozier, granddaughter Hayley Cheyenne Dozier; and many other relatives and friends