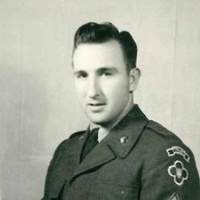 Jerry Lee Sweat was born in Commerce, Texas, to Dewey Sweat and Christine Evans on February 5, 1930. Jerry served his country proudly in the US Army for 20 years. While in the Army, he met the love of his life, Lilianna, and later married on March 15, 1953, in Trieste, Italy. Before moving to Quitman in 1979, Jerry worked as a shop foreman for the Dallas Police Department, and for Jeep Corporation in South Bend, Indiana.

He was preceded in death by his parents, Dewey and Christine Sweat, and one sister, Iva Lou Sweat.

He is survived by his wife of 64 years, Lilianna Sweat of Quitman, and numerous cousins and close friends.

Services for Jerry Sweat will be held on Friday, January 19, 2018, at 3:00 PM at Lowe Funeral Home with Father Bernard Boteju officiating. The family will receive friends one hour prior to service time.

To order memorial trees or send flowers to the family in memory of Jerry Lee Sweat, please visit our flower store.