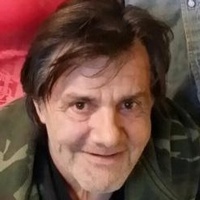 Jay Daniel Puchtler was born in Methuen, Massachusetts on June 24, 1957 to Daniel C. Puchtler and Nancy Louise Hayes. He was a Pickton resident for 12 years, and had lived in Winnsboro for 20 years prior.

Jay was a transmission and tractor mechanic for Gibson Tractor. He was extremely smart and had attended a business college, studying computers. He could build any computer you could think of. He loved motorcycles and adored his dogs. Jay had also accepted Christ as his Lord and Savior before he passed away.

He is preceded in death by his mother, Nancy Louise Hayes.

Left to cherish his memory is his father, Daniel C. Puchtler of Waco; two daughters, Kimberly and Danyeil; brother, Kenneth Puchtler of Virginia; four sisters, Linda, Sherry, Maribeth, and Patty; three grandchildren; his three dogs; and several nieces, nephews, and extended family from out of state.

In lieu of flowers, please make a donation to a cancer patient in need.

To order memorial trees or send flowers to the family in memory of Jay Daniel Puchtler, please visit our flower store.