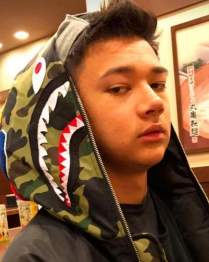 Jason Sylverius Sigurdsson was brought into our world on September 14th, 2001 by his mother, Erny Hastuty and his father, Sigfus Sigurdsson, at Torrance Memorial Hospital located in Torrance, California.

Graveside Service will be held at 5:00 PM, Saturday, October 8, 2022, at Sigurdsson Family Cemetery in Mineola, Texas.

Despite not living the military lifestyle until 2008, Jason was all-Army throughout the entirety of his life. He grew up watching army movies with his friends and family and would always draw pictures of Army Soldiers saving the day. After Jason's father joined the United States Army in 2008, the Sigurdsson family began a new chapter in their lives and Jason's dream of living a military life would soon become true. After entering Active Duty, the Sigurdsson's moved to to their first duty station, Fort Irwin, California in 2010. While at Fort Irwin, Jason attended Tiefort Intermediate School and Fort Irwin Middle School where he made many life-long friends that he adored.

In 2015, the Sigurdsson family PCS'd to Korea for the first time and Jason fell in love with it. He went full throttle during his first year of highschool doing JROTC at Seoul American High School and had a lead role in the success of countless color guards, drill performances, Far East drill competitions, and several volunteer events across the countries of South Korea and Japan. He worked very hard in JROTC and that was proven by achieving the rank of Command Sergeant Major (CSM). In 2019, Jason made his family and friends very proud and graduated from Seoul American Middle High School. He then attended Robert Morris University to study Criminal Justice in Pennsylvania and eventually moved back to South Korea on his own to embark on his own path. From 2021-2022, Jason worked temporary job for AAFES at Osan Airbase until he planned to enlist in military service. He created many amazing friends that would aid in his success into becoming a full-fledged adult.

To order memorial trees or send flowers to the family in memory of Jason Sylverius Sigurdsson, please visit our flower store.