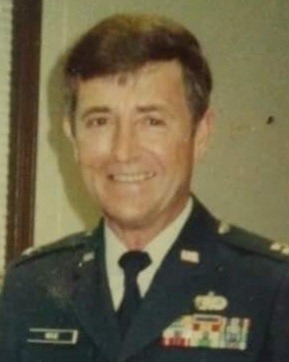 On November 24, 2022, James Walter Wylie, age 74, of Mineola, passed away surrounded by his family. He was born on August 13, 1948, in McKinney, Texas to the late Raymond and Rosa Mae (Kimberlyn) Darland

James joined the United States Air Force in 1966 and served in the enlisted ranks, and later crossed over to the officer corps, retiring as Captain. He later became a Juvenile Probation Officer in Wood County. James and Anita were married on January 18, 1985, in McKinney. James and Anita were members of Hubbard Chapel Baptist Church in Hainesville.

He is preceded by both his parents, Raymond and Rosa Mae Darland and his brother Bo Darland.

Left to cherish his memory is his loving wife of 37 years, Anita Wylie; their children, daughter, Danielle Oliver and her husband Jared of Mineola; son, Brandon Brown and his wife Kristti of Mineola; and son, Jason Wylie and his wife Shannon of San Antonio; a sister, Marion Smith; brothers, Michael Darland, Monty Darland, and Billy Darland as well as 10 grandchildren.

Funeral Services for James Wylie will be held at 1:00 P.M. Wednesday, November 30, 2022, at Hubbard Chapel Baptist Church in Hainesville, Texas with Brother Rick Ellington officiating. The family will receive friends one hour before the service beginning at 12:00 P.M. at the church. Burial will follow at Concord Cemetery in Hainesville.

For those who desire, memorial contributions can be made in his honor to St. Jude’s Hospital, ALSAC/St. Jude Children's Research Hospital 501 St. Jude Place Memphis, TN 38105, or https://www.stjude.org/

To order memorial trees or send flowers to the family in memory of James Walter Wylie, please visit our flower store.