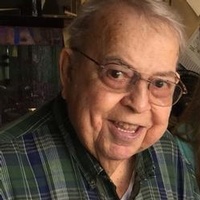 Funeral service for James â€œR.V.â€ Martin, 84, of Alba, is scheduled for 10:00 AM Thursday, April 6, 2017, at Lake Fork Baptist Church with Brother Perry Crisp officiating. A graveside service will follow at 4:00 PM at Woodmen Cemetery in De Kalb, Texas. The family will receive friends from 6:00 â€“ 8:00 PM Wednesday, April 5th, at Lowe Funeral Home.

James â€œR.V.â€ Martin was born May 25, 1932 to Raymond and Vera (Griffis) Martin. R.V. served his country proudly in the US Army during the Korean Conflict. In 1986 he moved to Alba from Englewood, Colorado. He was the Safety Director for BF Walker Trucking, a retired DPS officer, and the former owner of Martinâ€™s Fishing Resort. R.V. was also a Mason and a member of Lake Fork Baptist Church.

He is preceded in death by his parents and one brother, Clovis Hoglan.