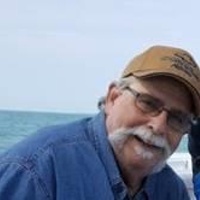 Jack Christian Rau, 70, passed away peacefully in his sleep Saturday morning, May 25, 2019, at Heritage Nursing Facility.

Jack was born December 2, 1948, in Decatur Illinois, to Earl Eugene Rau and Dorothy Mae (Jack) Rau, who preceded him in death.

Jack attended Austin Township Grade School Grades, 1-6; Warrensburg;-Latham Junior High School, Grades 7-8; and Warrensburg-Latham High School (WLHS), Grades 9-12. He graduated from WLHS in 1966. He was active in sports -- baseball, basketball, and football. He also participated with the marching band as a flag bearer at football games. He attended college until he enlisted into the Air Force in 1968. He served from December 30, 1968, until December 29, 1972, including 1 year in Viet Nam, as a Jet Engine Mechanic. He then returned to Nellis AFB, Las Vegas, Nevada, to finish his commitment. As a result of his service to his country in Viet Nam, he was determined to be a 100% disabled veteran.

Jack remained in Las Vegas where he began working for the U.S. Postal Service. He was married and raised his family there (two children and a granddaughter). He also made many good life-long friends. He enjoyed golf, fishing, boating, and cooking He retired from the U.S. Postal service after 37 years.

In 2010, He moved from Las Vegas to Quitman, Texas, with his best friend and fishing buddy, where they could fish, boat, and play golf. They were able to enjoy all of these sports, although fishing and boating most recently. He also loved hot rod cars and recently purchased a 1948 Chevy that he enjoyed so much.

Jack will be sorely missed, especially by those closest to him and the new neighbors and friends in Quitman, Texas.

A memorial and graveside service will be held at Brintlinger and Earl Funeral Home, 2827 North Oakland Avenue, Decatur, Illinois, June 12, 2019 at 1:00 pm. Burial with military honors will follow at Illini Cemetery, Warrensburg, Illinois.

Memorials may be sent to Wounded Warriors or St. Judes.

Brintlinger and Earl Funeral Home
To order memorial trees or send flowers to the family in memory of Jack Christian Rau, please visit our flower store.