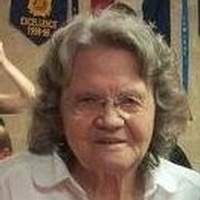 Graveside service for Irma Carroll, 88, of Winnsboro, is scheduled for 11:00 AM Monday, September 10, 2018 at Moore Memorial Gardens in Arlington.

Irma Lou Carroll was born October 31, 1929 in Henrietta, TX. She was the daughter of Lena Rector and Edward Poduska. On June 14, 1946 she married the love of her life, Willie â€œBillâ€ Carroll, after only two weeks of dating. The two met on a blind date set up by her mother on June 1st. They married two weeks later and were married 57 years at the time of his death in 2003. She traveled and lived with her husband all over Texas and Louisiana since his employer sent him to many different construction sites. In 1951 they settled in Grand Prairie in order to have a permanent hometown for their 5 children. She loved canning their own garden vegetables along with sewing clothes for her children and husband. Sewing was one of her passions. She was an amazing seamstress and could make anything she set her mind to. Irma worked for Kodak in Dallas, developing film for 25 years before retiring. In 2005 she moved from Grand Prairie to Wood County and attended First Baptist Church of Quitman.

Irma passed away Wednesday morning, September 5, 2018 at her daughters home in Winnsboro.

She is preceded in death by her mother and stepfather, Lonnie Leo and Lena Rector Doom; loving husband of 57 years, Bill Carroll, on July 5, 2003; and her oldest son, Rodger Carroll.