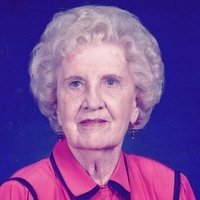 Inez was born August 18, 1922 in the Pueblo Community near Putnam, Texas to Chester and Emogene (Jeter) Allen and died February 13, 2019 in Quitman, Texas. She was raised in the Pueblo Community and graduated from Moran High School, later graduated from Abilene Business School plus worked 10 years for the General Motors Corporation. She was honored by earning Oldsmobileâ€™s Nationwide Highest Achievement Award as a part of the Oldsmobile Business Management Club.

On March 14, 1942 she married Miles Benda, a WWII Army soldier and farmer/rancher. They lived many happy years in the Moran-Albany area.

Inez was a loving, courageous, fantastic wife, mother and homemaker. She always placed Godâ€™s Will first in her life and was a tireless, faithful worker for her Christian faith. She was diligent in service for Godâ€™s missionary vision and in service for her Baptist church while she always remembered others and their needs. Throughout her life she continued to be a constant worker in community activities.