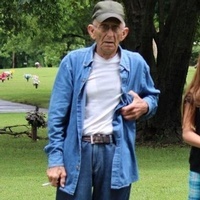 Memorial services for Mr. Harry King Slack, 80 of Quitman, Texas are scheduled for 2:00pm, Friday, April 19, 2019 at his favorite restaurant, the Red Dome.

Harry was born January 11, 1939 in Nashville, TN to Pearcy Nish and Lucille King Slack. He was a retired carpenter and served in the United States Air Force. He was preceded in death by his parents, and sisters Dorothy Elaine Slack and Guidana Louse Hammonds.