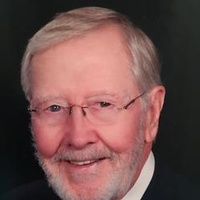 Funeral service for Gordon E. Stone, 92, of Dallas, is scheduled for 1:00 PM Saturday, October 28, 2017 at First United Methodist Church in Quitman with Rev. Keefe Cropper officiating. Public viewing will be held from 12:00 PM to service time. He will be laid to rest at Quitman City Cemetery following the service.

Gordon E. Stone was born in Braham, Minnesota on March 12, 1925 to Christine (Oslund) and John Stone. He passed away Friday, October 20, 2017. He attended schools in Braham, graduating as valedictorian. He was very proud of his military service as a paratrooper in the 11th Airborne during the occupation of Japan. He graduated from the MN School of Business. After working in a variety of businesses, he went to 3M Company and was later transferred to Dallas. Next, he became owner of Semi-Tech, Inc., now known as Dac Vision. After retirement, he moved to beautiful East Texas, residing at Lake Quitman. He became active in the church and community. They recently moved to Dallas.

Gordy was a dedicated Christian, devoted husband, and a loving father, grandfather, and great grandfather.

He is preceded in death by his parents, step mother, and sister.

Left to cherish his memory is his wife of 68 years, Alice Stone; step sisters, Marilyn From and Lois Woodward; brothers in law and sister in law, David and Annette Olson and Michael Collins; two sons, Gregory Stone and wife Margie and Todd Stone; daughter, Karen Sampson and husband Terry; 9 grandchildren and spouses, 8 great grandchildren, and numerous nieces, nephews, and a host of friends.

Gordyâ€™s grandchildren will serve as pallbearers.

If you wish, please make a donation to First United Methodist Church in Quitman, TX, JDRF of Dallas, or Visiting Nurses Association (VNA).

Funeral arrangements are under the direction of Lowe Funeral Home, Quitman, TX.

To order memorial trees or send flowers to the family in memory of Gordon E. Stone, please visit our flower store.