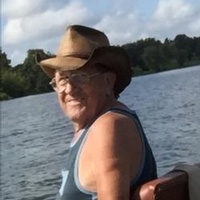 Glenn went to be with the Lord on Thursday, January 25, 2018 in Quitman after a short illness. He was born June 28, 1947 in Mineola to the late Hazel and Paul Gregory. Glenn was raised in the Yantis/Sulphur Springs area, and later moved to Terrell where he met and married Gaye. He was chief of security at Terrell State Hospital for many years, and loved to go fishing in his spare time.

Glenn was preceded in death by his parents, Hazel and Paul Gregory; sister, Billie Davis; and niece, Donna Davis Harlen.

Glen is survived by his wife of 39 years, Gaye Gregory of the home; daughter, Cindy Carney, grandson Garrett Carney of Dallas; granddaughter Brittany Carny of Florida; son, Brad Gregory and wife Christi, grandson Dalan, and granddaughter Brenna of Mesquite; great niece, Paula Harlin of Cooper; and many nieces, nephews, and in laws who he loved very much; and his dog, Bingo.

To order memorial trees or send flowers to the family in memory of Glenn Lee Gregory, please visit our flower store.