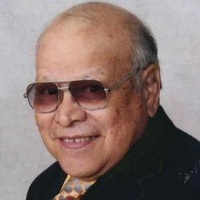 Memorial services for Jerry Saldana Jr., 76, of Mineola, are scheduled for 2:00 PM Thursday, March 3, 2016 at Mineola Church of Christ in Mineola with Brother Mike Fergason officiating. The family will receive friends Wednesday March 2nd from 6-8 PM.

Jerry was born October 28, 1939 in Houston to Gervacio and Mary Saldana and died February 28, 2016 in Mineola. He lived in Mineola 40 years, coming from Houston. Mr. Saldana retired from Trane where he worked on the assembly line. He was also a veteran of the United States Air Force and a member of Mineola Church of Christ.

He is preceded in death by his parents and one brother.

To order memorial trees or send flowers to the family in memory of Gervacio "Jerry" Saldana Jr., please visit our flower store.
Send a Sympathy Card
Send a Sympathy Gift