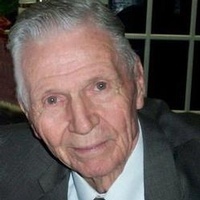 Frank Watson Robertson, 89, completed his earthly journey on October 19, 2015, at his home in Quitman, Texas, with his loving family at his side.

Frank was born January 7, 1926, in Dallas, Texas, to Alvy L. and Anna Mae Watson Robertson. He was the 2nd of two children. He grew up in the Dallas area and graduated from Grand Prairie High School in 1942. Frank was a World War II veteran, and in 1943 at the age of 17, he joined the U.S. Navy and served aboard the U.S.S. Ranger. He achieved the rank of 2nd Class Petty Officer prior to his honorable discharge in 1946. He re-enlisted in the Navy Reserves in 1950 and served for an additional 1Â½ years at the Naval Air Station in Grand Prairie.

He met Bobbie, the love of his life, at First Baptist Church in Grand Prairie, where they were married on December 13, 1946, and have spent the last 68 years together. He spent his professional career in the insurance industry. He was employed by Employers Casualty in 1952 and worked in sales in Dallas and Abilene. In 1958, he was promoted into management and managed their district offices in Sherman, Waco, and Dallas. In 1980 he went to work for Marsh & McLennan, a worldwide insurance brokerage firm, and retired as a senior vice president in 1990.

Frank was a Mason for over 65 years and he was a true believer in civic affairs. He served a total of twenty-one years in elective offices on both the School Board and City Council in Grand Prairie. During this time, he also served as President of the School Board, as well as Mayor Pro-Tem. He served on numerous committees and boards while on the Council, including the Grand Prairie Sports Corporation, which was instrumental in the construction and establishment of Lone Star Park. In 2004 Lone Star Park brought world-class horse racing to the metroplex by hosting the Breeders' Cup. The City of Grand Prairie named the municipal court building the Frank W. Robertson Municipal Courts Building in 1999 as a tribute to his service.

Preceding him in death were his parents and his son, Larry Robertson.

To order memorial trees or send flowers to the family in memory of Frank Watson Robertson, please visit our flower store.