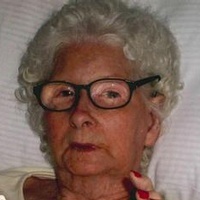 Graveside services for Francis Pearl Baird, 95 Quitman are scheduled for 11:30 A.M. Tuesday in Restlawn Memorial Park, Sulphur
Springs. Burial will follow in Restlawn Memorial Park. Family will receive friends 10:00 A.M. Tuesday at Lowe Funeral Home Quitman before the
service in Sulphur Springs at 11:30 A.M. Francis was born April 21, 1919 in Dike, TX to Charley and Mattie Smith Cain and passed away April 27, 2014 in Quitman. She was owner/manager of a nursery and a Methodist.

Francis is preceded in death by her husband L. D. Baird in 1996; a son Charles Baird , 2013 and a daughter, Jeanne Adkins, 1999.
She is survived by a daughter and son-in-law, Carolyn Wilkins and Elbert, Quitman; 8 grandchildren; 6 great grandchildren; 2 great great granddaughters and several nieces and nephews.

To order memorial trees or send flowers to the family in memory of Francis Pearl Baird, please visit our flower store.