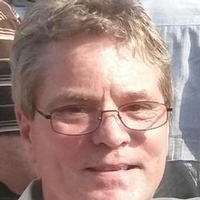 Edward Eugene Marnell, 52, died peacefully Thursday, Sept. 28, at his home in Lake Fork, TX. He was born on Feb. 15, 1965 in Iola KS, the second of three sons to Gerald Eugene Marnell and Rita Jo Thornhill Marnell. The family moved to Humboldt, KS in 1975 where Eddie attended school and graduated from Humboldt High School in 1983. He then attended Pittsburg State University where he was a member of Pi Kappa Alpha Fraternity and graduated with a degree in Automotive Technology. After college, he moved to Dallas, TX where he worked for various automotive shops specializing in foreign cars. In Dallas, he married Tammy Lynn Murphy on July 1st, 1989. They had three children - Kyle, Kevin, and Kailey. They later divorced but remained good friends.

Eddie received a degree as an Airplane and Power Frame Mechanic in 1994. A master mechanic, his passion was engines and fast cars. He restored his prized 1971 Chevelle and loved working on his Z Car. He raced stock cars at various tracks in the Dallas area. His love of cars was second only to the love he had for his family who he enjoyed spending time with while fishing on Lake Fork.

He was preceded in death by step-father Bob Thomas.

In lieu of flowers donation can be made to

To order memorial trees or send flowers to the family in memory of Edward Eugene Marnell, please visit our flower store.