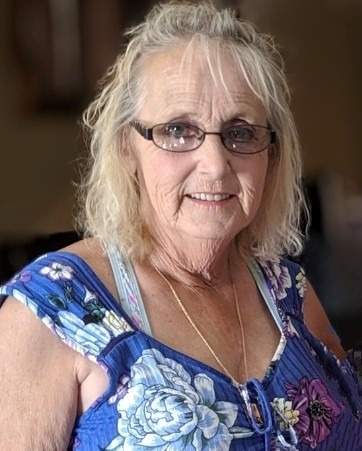 Diane Renee Flores was born in Newport, Rhode Island on September 7, 1954, to Donald and Renee O’Dens.  In 1972 she graduated from Killeen High School and went on to marry the love of her life, Roman Flores, on December 27, 1972.  To this marriage, three children were born: Sean, Jason, and Heather.

Diane was a longtime resident of Grand Prairie, Texas, and worked over 40 years as the office manager for Tom Thumb.  After many dedicated years, she retired and moved to Quitman.

Diane was what most would call a shopaholic, loved to play slots at the casino, enjoyed camping and water parks, but was most known for her love of flip-flops.  Rain, snow, or shine, she always wore her flip-flops.  She loved them so much that she even wore them during a trip to a Colorado ski resort. While there, a news reporter stopped her and wanted to have her on the news, but he didn’t have his camera!

Diane was a very private and simple woman.  She loved her self-care routine and always had her hair and nails done. She was also very intelligent when it came to numbers.  Her mind was very quick and she was like a human calculator.

Her favorite holiday was Christmas and loved to celebrate with her family. She was a devoted wife and loving mother, but one of her all-time favorite titles was “Grandma Diane”.

She greets in Heaven her mother and father, Donald and Renee O’Dens; and one grandchild, Miguel Flores.

Left to cherish her memory is her faithful husband of almost 50 years, Roman Flores Jr. of Quitman; three children, Sean Flores and partner Peyton of Quinlan, Jason Flores and wife Amelia of Quitman, and Heather Flores of Quinlan; one brother, David O’Dens and wife Dana of Plano; nine grandchildren, Cheyenne, Desiree, Sebastian, Ethan, Mia, Serena, Romeo, Kelsey, and Rebecca; 18 great grandchildren; one grand-dog, Bubba; her faithful chihuahua and pug, Scooter and Bella; and a host of extended family and in-laws.

A memorial service for Diane will be held at 11:00 AM Saturday, September 17, 2022 at Lowe-Gardner Funerals & Cremations.

To order memorial trees or send flowers to the family in memory of Diane Renee Flores, please visit our flower store.