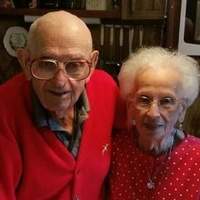 Funeral services for DeWitt Loomis Blanchard, 93, of Quitman, are scheduled for 2:00 PM July 22, 2016 at Lowe Funeral Home with Reverend Bill Hedges officiating. Burial will follow at Roselawn Memorial Gardens in Mineola. The family will receive friends at the funeral home one hour prior to the service.

DeWitt Loomis Blanchard was born December 4, 1922 in Woodward, Iowa to Roy Lloyd and Blanche (Dugan) Blanchard, and passed away July 20, 2016 in Quitman. He was a Quitman resident since 1977 where he was a member of Liberty United Methodist Church and the Masonic Lodge.

He is preceded in death by his wife in 2015, Theresa Blanchard; both parents; and one sister, Beulah Blanchard.

To order memorial trees or send flowers to the family in memory of DeWitt Loomis Blanchard, please visit our flower store.