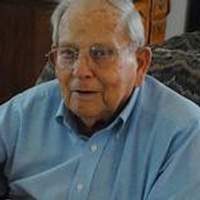 Services will be at 2:00 Wednesday, June 25 at Lowe Funeral Home Chapel of the Chimes. The family will receive friends at 1:00 PM prior to the services.

He was a World War II Veteran of the United States Navy. Dee retired from Armaco Steel after 35 years.

Dee was preceded in death by his parents and a daughter, Barbara Calvert.

To order memorial trees or send flowers to the family in memory of Dee "Buddy" Calvert, please visit our flower store.