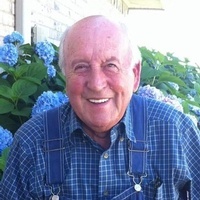 CT Almand was born April 4, 1933 in Rosston, Arkansas to Chester T. and Clovis C. (Bustin) Almand. After graduating from Laneburg High School, he joined the Air Force. He served his country proudly during the Korean War. He was based in Morocco and was an aircraft mechanic.

He later owned and operated an aluminum company out of Sulphur Springs that manufactured the staging for concerts. He worked for George Strait and his band and manufactured their staging equipment. CT was also a truck driver for Kroehler Manufacturing for over 25 years.

CT was Master Mason for over 50 years and a member of the Scottish Rite and Shriners, and prior served as secretary and treasurer of the Yantis Masonic Lodge. He was a member of House of Prayer in Emory, but was a member of Lake Fork Baptist Church for many years prior to joining House of Prayer. He owned property in Alba and lived in Emory before moving to McKinney in 2017. C T was an avid gardener and also loved to hunt and fish. He had a funny personality and was a jokester. In January 2006 he married Doris McKinstry. The two were married 11 years at the time of her passing in 2017.

Left to cherish his memory are his sons, Scott Almand of Washington and Paul Tyson and wife Kim of McKinney; daughters, Lisa Almand of New Mexico and Brandi Tyson Burger and husband Nick of San Francisco, CA; sister, Mary L. Coffee of Hope, AR; his close friend who was always like a son to him, Derek Zane Gracy of Kaufman; close friend, Johnny McBride, and lifelong friend Dodie Ellis. He is also survived by 7 grandchildren, 3 great grandchildren, and numerous nieces, nephews, and extended family.