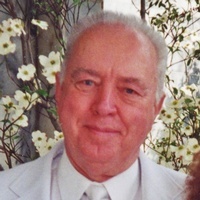 Funeral service for Cleo Swartz, 90, of Holly Lake Ranch, is scheduled for 10:00 AM Monday, May 28, 2018 at The Church of Jesus Christ of Latter-day Saints in Quitman with Bishop Wayne Crabb officiating. Committal will follow at Kelsey Cemetery.
Cleo Eugene Swartz was born in Salina, Kansas on September 25, 1927 to Clyde Reginald and Mary Ellen (Moredock) Swartz. He served his country proudly in the US Navy and was a fighter pilot in the Korean Conflict. Cleo retired after working 33 years in the Oldsmobile division of General Motors. He and his wife, Julie, were residents of Holly Lake Ranch for 20 years, where he was Treasurer of the Holly Lake Hook and Ladder (supporting the Volunteer Fire Department). Cleo was also a member of The Church of Jesus Christ of Latter-day Saints in Quitman.
Cleo passed away Wednesday morning, May 23, 2018 at his home.
He is preceded in death by his parents, Clyde Reginald Swartz and Mary Ellen (Moredock) Swartz; his wife of 64 years, Julie Swartz, in 2017; and his twin brother, Cecil Swartz.
He leaves behind his two sons, Chris Swartz and wife Shirley of Allen, and Michael Swartz and wife Monica of Plano; daughter, Shari Swartz of Holly Lake Ranch; sister, Marcele Patton of Crystal River, FL; six grandchildren and twelve great grandchildren.
Serving as pallbearers is Chase Swartz, Thomas Archibald, Scott Grundei, Randy Householder, David Householder, Jeffrey Jon, Jerry Richardson, and Brian Miller.
In lieu of flowers, please make a donation to the LDS Humanitarian Fund.

The Church of Jesus Christ of Latter-Day Saints
To order memorial trees or send flowers to the family in memory of Cleo Eugene Swartz, please visit our flower store.
Send a Sympathy Card
Send a Sympathy Gift