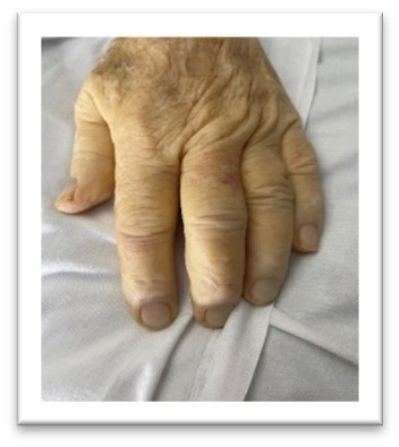 This hand was welcomed into the world on October 14, 1944, by his parents Annabelle and Raymond Winters and two excited sisters, Annette and Carol Ann in San Antonio, Texas. Charlie was the apple of his mom’s eye and the terror of his sisters. This hand welcomed a baby sister, Sue, when he was three years old.

This hand played the coronet, delivered Dr. Pepper, caught many balls as a catcher for his high school baseball team while growing up, all the while continuing to be the brother that picked on (lovingly, to be sure) all his sisters. Charlie loved lending a hand on his Uncle Buddy’s shrimper any time he could in Rockport, Texas.

On Friday, October 8, 1965, this hand lovingly reached out and held the hand of Carol Ann (Moore) as they said their vows of marriage to each other at St. Gregory Catholic Church in San Antonio in front of family and friends. Charlie started his career at International Harvester in 1965.

This hand and Carol’s welcomed their first child, Melanie Ann, September 15, 1966, Todd Anthony was welcomed on July 1, 1969, and Brian Joseph was included in the embrace on September 4, 1973.

This hand proudly cheered at games, taught little hands to fish and camp, and worked on all manner of things around the house. Guiding his boat through channels off Rockport, catching a sunburn and an occasional fish were his favorite things to do. Enjoying a Miller Lite made the deal all the sweeter.

This hand guided co workers as he climbed the ladder at Southwest International Trucks. He retired as Operations Manager in 2005 after leading a successful sales department for years. He and Carol were able to see many amazing places with Southwest.

After a lengthy struggle, dad changed addresses to a facility that could help with his care as his memory began to fade. His last few months left his hand idle but still would squeeze yours back.

On Sunday, January 23, 2022, at 9:30am he was reunited in Heaven with his memories, his parents, his sister Carol Ann and a host of aunts and uncles. Those left behind to miss his hand’s embrace are Carol, his wife of 56 years, Melanie (Randy), Todd, Brian (Shana). His grandchildren Lauren, Austin, Jennifer, Emily, and Bella. His sister Sue and husband Raymond Dragoo, son Mark, sister Annette Caffery, daughter Jean. Sherrie Stone, daughter of sister Carol Ann. His memory will be cherished by many other family and friends.

To plant memorial trees or send flowers to the family in memory of Charles Winters, please visit our flower store.

Your condolence is awaiting moderation. Once approved it'll appear in the guestbook.

Charles and I had wonderful times as teenagers . Fishing, camping, and 9-hole golf. I know he will be missed by all who knew him. My condolences to his family.
Sugie

I am thinking of each of you as you celebrate Charlie's life. I have many fond memories growing up with your family and especially of Charlie. Boating, fishing, camping and especially being told to get him a Miller Lite when he was empty. Something I have been happy to ask of my kids from time to time. Seeing him lying on the floor listening to a ball game on a small radio when a perfectly good TV was right next to him. How can I forget him introducing me to tomatoes by shoving one in my mouth. But, now I love a good tomato sandwich. Take care of each other and celebrate the wonderful life he lived knowing the impact he made on our family.

We met Charlie and Carol over 40 years ago in Plano, Tx. They were our neighbors two doors away. Our children grew up together and found Charlie to be a mischevious friend. Our friendship grew over the years even after we both moved away from Plano. We found ways to vacation together for many years from the east coast to the west coast and on to Hawaii. With each visit it was like we never moved apart. Telephone conversations in between vacations kept us close and up to date on our lives, children and grandchildren. Charlie had a dry sense of humor that would come out spontaneously and unexpected times that would make us all break out in laughter. I enjoyed many Miller Lights with Charlie everywhere we traveled. Visiting with he and Carol was always fun and our friendship as well as he was always genuine. We could talk for hours and there would never be a dull moment. I watched him cook brisket and ribs on the grill that were as delicious as any purchased in a BBQ joint. Charlie was a friend that I'll miss greatly. The vacations want be the same in the years to come.