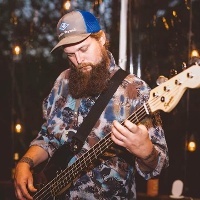 Left to cherish his memory is his wife of 13 years, Jessica Kennemer of Quitman; mother and step father, Tammy and Paul Kelbe of Alba; his two children, Kevin Darnell Kennemer and Kyla Dawn Kennemer; siblings, Brenna Russell and husband Drew of Quitman, Collin Kelbe of Alba, and John Kelbe and wife Andrea of Garland; nephew, Cullen Russell; niece Avery and Hattie Kelbe; and numerous extended family members and many friends.

Brett was born in Tyler on March 7, 1988 to Kevin and Tammy Kennemer. Brett lived his entire life in Quitman, graduating from Quitman High School in 2006. In 2007 he married Jessica Henson, and later had two children, Kevin and Kyla. He was a member of Spur On Ministries, and a former member of Myrtle Springs Baptist Church.

Brett worked as a Lease Operator for Gaither Petroleum and worked part time at Neon Moon Restaurant and Club, but enjoyed being a musician the most. He was extremely talented and played several instruments, mostly those with strings. He was a member of Whiskey Confessions, bass player in the Chris Bevill Band, and was the front man in the Hainesville Traveling Radio Show in his last few years.

Visitation for Brett is scheduled for 6-8 PM Thursday, August 1, 2019 at Lowe Funeral Home. He will be laid to rest at Rock Hill Cemetery Friday, August 2, 2019 after an intimate private family graveside. A Celebration of Life service will be held at 6 PM Friday afternoon at Neon Moon Restaurant and Club, where all are welcome to attend.