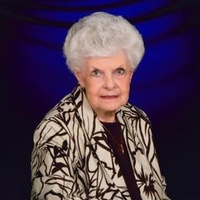 Bobbie Nell Robertson completed her earthly journey and entered her heavenly home on July 21, 2017, with her loving family by her side. She was 90 years old.

Funeral services to celebrate her life are scheduled for 1:00 PM, Tuesday, July 25, 2017, at First Baptist Church Grand Prairie, Texas. The family will receive friends one hour prior to the service. Burial will follow at Watson Cemetery in Arlington, Texas.

Bobbie was born on August 20, 1926, in Itasca, Texas, to Otis Cecil and Mattie Lou (Gibson) Douglas. She graduated from Itasca High School in 1943. Bobbie met Frank Robertson at First Baptist Church in Grand Prairie where they married in 1946. They enjoyed 69 years of marriage until Frank's passing in 2015. Bobbie was a homemaker for many years prior to working at Grand Prairie State Bank until her retirement.

She is preceded in death by her husband and her son, Larry Robertson (2013).

To order memorial trees or send flowers to the family in memory of Bobbie Nell Robertson, please visit our flower store.