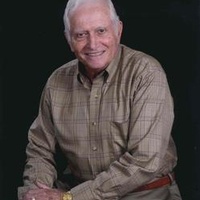 Funeral service for Benton Bryant, 81, of Yantis, are scheduled for 1:30 PM Thursday, August 25, 2016 at Faith Baptist Church in Quitman with Brother Mike Midkiff and Weath Bryant officiating. Burial will follow at Yantis City Cemetery. The family will receive friends from 6-8 PM Wednesday evening at Lowe Funeral Home in Quitman.

Benton Bryant was born on August 24, 1934 in Yantis to A. Judson and Annie Laurie (Benton) Bryant and passed away August 22, 2016 in Tyler. He lived most of his life in Yantis. He was a US Army veteran and later retired from an AMOCO Oil Company where he was a Personnel Manager. He was a member of Faith Baptist Church in Quitman where he was a member of the Faithful Servants Sunday School Class. He served as chairman of the Wood County Soil Conservation, served as a board member of ETEX Banco at First National Bank Winnsboro, and also served as a member of the Yantis City Cemetery Association. In his spare time, he enjoyed ranching, gardening, spending time with his family, and volunteering serving meals at the Yantis Community Center.

He is preceded in death by both of his parents.