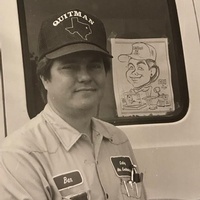 Funeral services for Mr. Benjamin Gordon Cathey, Jr., 67 of Quitman, TX are scheduled for 2 P.M. Tuesday December 4, 2018 at the Lowe Funeral Home Chapel with Tim Yeager and Norman Hicks officiating. Burial will follow at Quitman City Cemetery. The family will receive friends from 6 to 8 P.M. Monday evening at the funeral home.

Ben was born at a very young age on November 16, 1951 in Kingsport, TN to Benjamin Gordon, Sr. and Mary (Hunter) Cathey and died November 30, 2018 in Tyler. After graduating from QHS Ben went on to attain a degree in HVAC repair which he utilized to build Cathey Air Conditioning. He was a devoted Christian and an integral part of Quitman. Ben selflessly served his community by holding many positions including: President of the Quitman Chamber of Commerce, President of the Quitman Youth Foundation, President of the Quitman City Cemetery Association, Honorary Santa many years for the Quitman Fire Department, secretary for the Wood County Farm Bureau and was honored Quitman Citizen of the Year for 2000.

In lieu of flowers the family kindly requests donations be made to the American Heart Association or local charity of your choosing.

To order memorial trees or send flowers to the family in memory of Benjamin Gordon Cathey, Jr., please visit our flower store.