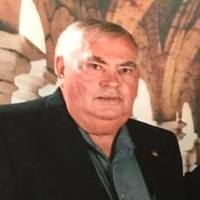 B. L. was born on March 31, 1942 in Wood County to the late Bernice Lee Woodard and Lilly Marie Harbin Woodard.

After decades of working in the oil/gas industry, he retired and began his favorite job as the #28 school bus driver for Winnsboro Independent School District. B.L was a devoted member as well as a deacon at Sharon Baptist Church.

He is preceded in death by the love of his life, Doris Rose Swann Woodard whom he married on May 30, 1962; his parents and brother Jesse Wayne Woodard.

He is survived by his two sons, Randy Woodard and wife Jamie of Blossom; Lance Woodard and his wife Amy of Greenville and one daughter, Melissa Woodard Ford and her husband Matt of Winnsboro. His grandchildren, great grandchildren and one granddog, Ben, Mike, Jessica, Bennie and Jett Hargrove, Jenna, Olivia, Race and Reed Woodard, and Jersey Merle also survive him; as well as Brother and Sister in Laws and numerous nieces and nephews.

To order memorial trees or send flowers to the family in memory of B L Woodard, please visit our flower store.