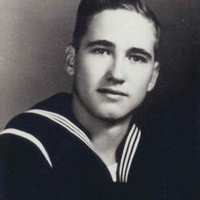 Graveside services for Alton Reid Brandon, 93, of Mineola, are scheduled for 10:15am, March 25, 2016 at the Dallas-Ft. Worth National Cemetery.

Alton was born December 24, 1922, in Winnsboro, TX to Otho L. Brandon and Anna Bell Reid Brandon and died March 17, 2016 at his home in Mineola. Mr. Brandon graduated from Burkburnett high school in 1940 and joined the US Navy August 1940. He served 37 months at sea aboard various baby flat tops and was honorably discharged August 1946 as Chief PhM1 USN.

He married Jean Cullum in 1945. Alton was employed by J.D. Cullum Co. and by Dr. Marvin P. Knight of Knight, Ware and Southerland Clinic for 19 years and worked as Field Assistant for Dr. Knight with the Dallas Cowboys from 1960-1972. He later worked with Zale Corp. and E.D.S. as claims administrator. Thereafter he moved to Quitman in 1986.

To order memorial trees or send flowers to the family in memory of Alton Reid Brandon, please visit our flower store.